In 2016, Özlem Yeni, a Turkish artist, university professor and set designer, arrives in the dusty heat of the mining town of Mount Isa in Queensland and decides to enroll in clay workshops.

She took a course on clay construction and enjoyed it, but she struggles with the next unit: wheel turning. “After all, whatever you do with a wheel will just make a circular object. ‘Not much room for creativity,’ I thought, Yeni said.

Looking for inspiration, she goes to the clay club archives and discovers a collection of dust-covered paper craft magazines. She wipes the dust from a copy of a newspaper titled Crafts of February/April 1987.

“No one uses paper magazines anymore. They use Pinterest or go online,” she says. It’s another era. Nonetheless, she nonchalantly begins flipping through the magazine.

Opposite her are images of deceptively simple black bowls, but the potter carefully broke the bowl and then fired the shards. He blackened some and left others in the original terracotta. Then he restored the bowl. In some of the bowls there are tiny lines of gold leaf etched into the cracks.

Yeni says she was particularly moved that the author visited and lectured in her native Turkey and learned clay techniques there. In the article, the author describes a walk in the limestone desert of Turkey when he sees a dome of tiles of brilliant turquoise color. He sees the dome as an overturned basin. Entering the mosque, he sees a text on a wall:

“The quote was very moving but again it was in very simple words,” Yeni says.

The article, titled “Glimpses of Essence”, is written by a Petrus Spronk, described as a ceramist/traveller. On the front page, Yeni notices a black-and-white photo of a Rasputin lookalike with long hair, a sparse beard, and piercing eyes. His arms are heavily muscled and he holds a large black burnished bowl in one hand.

” I had goosebumps. I liked it. I loved the idea of ​​using different shapes for the bowls. I also loved how sturdy they were – the shape and the design – even though they were so simple. It was like “less is more”.

Yeni starts writing a fan letter, but doesn’t like it. Naturally, it must be written in English and his English is not very good yet. It’s embarassing. She does not send it, but keeps it.

Several years later, in 2019, Yeni and her husband moved to Adelaide and, as soon as COVID started, she opened a gallery: The Main Gallery in Halifax Street. His studio is in the gallery – as are all his papers, including the abandoned letter to Petrus Spronk. No time to sort them before the grand opening, the day before national confinement.

After the opening, she has time to go through her personal papers and rediscovers the letter. This time, she says, she loves it.

“It was so naive. Full of joy to discover his work and the Turkish connection.

She finds Spronk’s email and sends a more mature version of the letter, just hoping for a response. Within hours, Petrus Spronk responds.

Soon, Yeni arranges a visit to his Bald Hill studio in Daylesford, Victoria, and from there they develop the idea of Night and dayan exhibition in his gallery.

Why did Spronk accept the exhibition?

“I liked his energy,” he says. Now 82, he says at his stage of life, “you have to encourage the younger ones”.

“I do not even know consider to be old. I just keep working and if I’m no longer able to “entertain” the creative mind, I’ll give up my life. The creative spirit is my life force and keeps me going.

Yet life did not give him an easy ride. This spirit helped him through about 13 years of Parkinson’s disease and bouts of cancer.

If they give you lined paper, write the other way around

In the 1987 article, Spronk rejects the term “potter” or “ceramist”, calling himself a traveler. From now on, he rejects the term “artist”. “I’m not comfortable with this term, this label [artist]. I’m just a creative person who works with clay.

Born in 1939, Spronk came to Australia aged 18 from the Netherlands, where he had been apprenticed to a baker. He soon found a job doing “nice work, decorating work” at a bakery in Glenelg. He says he learned valuable life lessons during his apprenticeship. “Plus, you can learn from any experience.”

“One of the teachers said, ‘You have talent. You should be a teacher. And that gave me the courage to apply for a course in fine arts. I applied for a course at art school but didn’t have my school leaving certificate at the time so I had to do it first and then I was accepted into it. ‘School of Fine Arts. I immediately did very well because I felt at home at the school of fine arts.

Among his teachers was the famous potter Milton Moon. Spronk says Moon taught him to go his own way.

“I have a wordless slide that I show at the end of my presentation. There is a flock of birds flying one way and a bird flying the other. I came across a saying I take with me: “If they give you lined paper, write the other way around.”

But he rejected another of Moon’s suggestions. “He also taught with some force that I needed to learn more about glazes, which I didn’t like at all.”

Instead, Spronk focused on the technique of burnishing – polishing the clay by rubbing it with a very smooth stone before the bowl was fired to make the clay, to some extent, more non-porous – and create the color black. 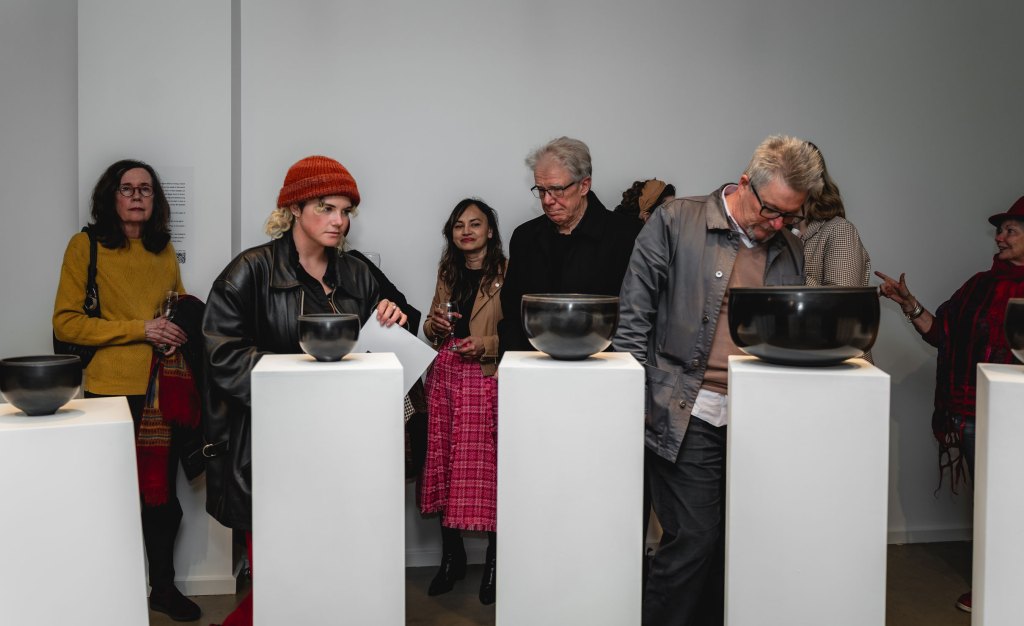 Black burnished bowls have been a lifelong obsession. Spronk left Australia in 1975 and traveled for eight years during which he “learned from those who had been before me”. This included the Pueblo people in New Mexico, who craft beautifully burnished black bowls.

He remembers sitting at night with an old Pueblo man “who pointed out the setting new moon, a ribbon of silver in the pale mauve sky. “We call this cosmic bowl, the receiver,” the old man said, and I found that notion poetic. It got me excited enough to make it a lifetime journey.

Spronk says for him, “everything becomes relevant to making a bowl”. “The path to the bowl is like my creativity,” he says, describing his process as a series of doors opening with every decision.

“I decided to choose clay as a material, so I see it as a door, a door to the many doors of the art world: painting, sculpture, printing, etc. I open the door to clay and I’m faced with many new doors – lathe work, hand build, etc. I choose another door that says “black, burnished”.

In 1987, he wrote: “Each bowl I make represents a discovery, a step on the way. Each bowl also represents a brief pause, a moment of reflection. It tells me where I am in my journey…”

Adelaide should count itself lucky that Spronk’s journey took him to Özlem Yeni, via the dusty archives of Mt Isa craft magazines, and back to Adelaide after an absence of nearly 40 years.

The exhibition Night and Day is at The main gallery, 156 Halifax Street, until June 25. On Friday, June 10, there is a Meet the Artists event starting at 2 p.m. On June 11 at 2 p.m., Spronk will present an artist talk. 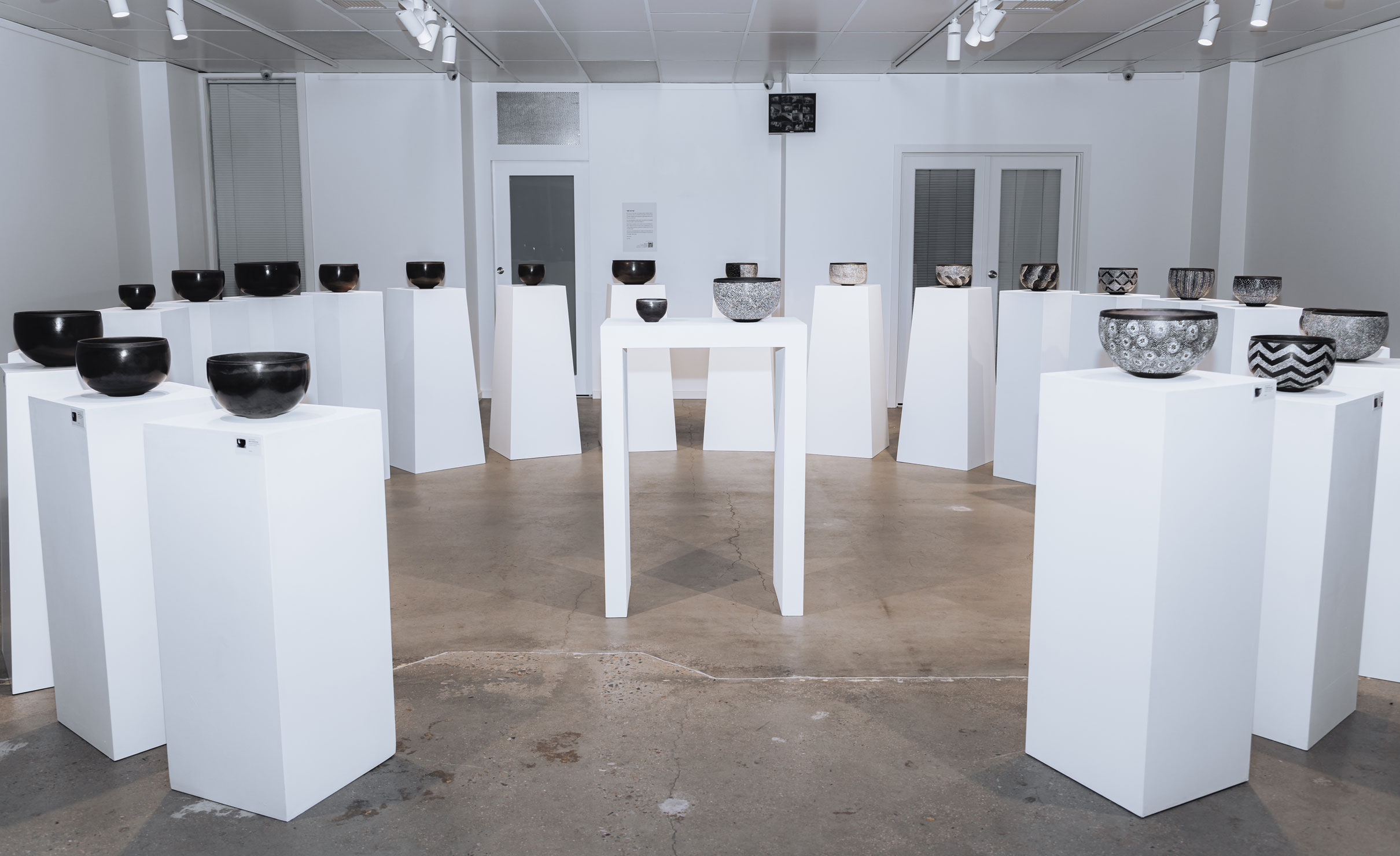 Increase your impact by doubling your donations

When you pledge to make a regular weekly, bi-weekly or monthly tax-deductible donation to InReview, each scheduled donation will be matched by Creative Partnerships Australia. That means you’re supporting twice as many InReview stories to order, edit, and publish.